Beyond the usual heroes

The pandemic upstaged a lot of things last year, including plans a number of people in this area had for recognizing an important moment in August: the 100th anniversary of final ratification of the 19th Amendment to the U.S. Constitution, giving women the right to vote.

But the story of women’s suffrage remains as relevant as ever, so a coalition of groups has organized an exhibit in downtown Florence that recognizes the passage of the 19th Amendment as well as the contributions many women made to that — and to the broader issue of increasing equality in the country.

“She Shapes History: American Women and the Right to Vote” brings the story to storefronts on Maple, North Maple and Main streets in Florence center, with informational panels displayed in seven buildings — 14 panels in total, with two in each building front.

Those panels provide a basic introduction to the history of the suffrage movement in the U.S. But more important, organizers say, they profile a wide range of women, in particular African Americans, Native Americans, immigrants, union organizers and others who have not gotten as much recognition for their role in advocating for women’s rights and enfranchisement.

Among the women profiled are some with local or Massachusetts connections, including the abolitionists Sojourner Truth and Lucy Stone. But others worked elsewhere, such as the Southern-born journalist and suffragist Ida B. Wells-Barnett, who beginning in the 19th century became an unrelenting opponent of the South’s Jim Crow laws. She also, notably, formed a Black women’s suffrage organization to fight segregation in the suffragist movement itself.

A basic premise of the exhibit, says one key organizer, is that history needs to be more than the study of major figures and vast, sweeping events.

“We really wanted to focus on the role of unsung heroes, not just the usual figures we’ve learned about,” said Margaret Riddle, a former Northampton educator and a member of the League of Women Voters of the Northampton area. Referring to people such as Elizabeth Cady Stanton and Susan B. Anthony, Riddle said “The [suffragist] movement has long been associated with upper-class white women, but there were many other people involved.”

The local chapter of the League of Women Voters is the primary organizer of the Florence exhibit, but the group has worked closely with the Florence Civic and Business Association, the JFK Middle School, The David Ruggles Center and a few other partners on the project, which opened April 3 and will be on display through May 1. An opening ceremony will take place Saturday at 10 a.m. on the lawn of the Florence Civic Center.

SEE ’SHE SHAPES HISTORY’ B4 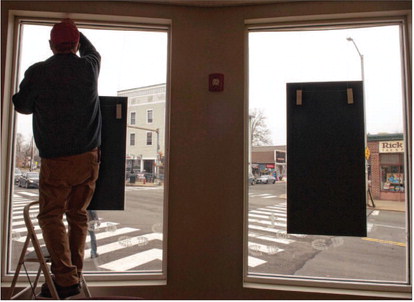 Bob Riddle, vice president of the League of Women Voters in Northampton, puts up panels for the “She Shapes History” exhibit. On view through April, they are in seven storefronts in downtown Florence. 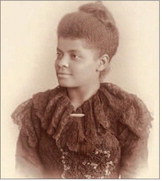 Ida B. Wells-Barnett, recognized in “She Shapes History,” was a journalist, educator, public speaker, and civil rights and women’s activist from the 1880s up to her death in 1931. 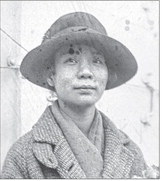 Mabel Ping-Hua Lee, who came to America in the early 1900s, was an ardent supporter of women’s right to vote, even though Chinese immigrants could not become citizens until 1943.

The most important collaborator on the project has been the Berkshire Museum in Pittsfield, which opened a more extensive version of “She Shapes History” in late 2019 and has lent a number of panels of the exhibit to the Florence project.

The museum’s executive director, Jeff Rogers, says he’s “absolutely thrilled” that people in the Valley will now get a chance to see the exhibit.

“We had no plans for this to travel,” he said. “But of course the pandemic changed a lot of plans for everyone, and so this is a great opportunity for us to share some of our work with another audience.”

Riddle says some local League members formed a reading group in the fall of 2019 to research the stories of some of these unsung figures with an eye to putting together some kind of exhibit on them to recognize the 19th Amendment anniversary. The pandemic scotched those plans, but Riddle said some League members had seen the Berkshire Museum exhibit before it, too, had to close for part of last year.

“That exhibit really matched what we’d been talking about, so we’re really happy to be able to bring it here,” she said.

The women profiled worked in many different areas, but all had a goal of greater equality for women and for Americans in general. Mary Burnett Talbert, for instance, an African American born in Ohio in 1866, was an educator, suffragist and public speaker who became an early champion of civil rights; she helped save Frederick Douglass’ historic home in Washington, D.C. And Mabel Ping-Hua Lee became an early and ardent supporter of the women’s vote in America even though, as a native of China who came to the U.S. as a young girl in the early 20th century — she would go on to earn a Ph.D. in economics — she was forbidden to vote for years because Chinese immigrants were barred from becoming U.S. citizens until 1943.

The exhibit also looks at how African American women, largely shut out of the larger white-led suffragist movement, formed hundreds of clubs to advocate for the vote that, by the early 20th century, had collectively became known as the National Association of Colored Women.

Regis Chandler, who teaches sixth grade language arts and reading at JFK Middle School, said she and a number of other teachers at the school worked with Principal Desmond Caldwell to incorporate material from the exhibit into classes for a “Women in History” curriculum in March.

“It was really cool to look at all the layers of these different stories that students wouldn’t easily be able to find on their own,” Chandler said. “It’s a good lesson for kids who are still in the process of forming their identities, to think about these kinds of issues: If you couldn’t vote, how could you make your voice heard?”

Riddle says she hopes the exhibit will also help draw increased foot traffic to downtown Florence to help businesses that have been hurt by the pandemic. And given the country just went though a volatile national election five months ago, and that access to voting remains a searing topic today, she said, “We think this exhibit will be very relevant to a lot of people.” 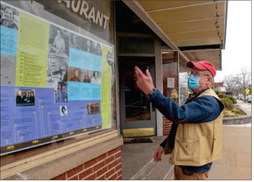 Bob Riddle, vice president of the League of Women Voters in Northampton, checks one of the panels he’s installed for the “She Shapes History” exhibit in downtown Florence.

Click here to see this page in the eEdition: